Estate agents are fond of describing certain local houses as “Christmas houses”. Of course, these houses have nothing to do with the festive season. They are the work of a local builder, Ted Christmas whose buildings have a reputation for quality and interesting detail both inside and out.

Edward Charles Christmas was born in Lewisham in 1867. By 1871 his family were living above the stables of Prospect House, which is now 79 London Road (on the corner of Taymount Rise). Ted’s father was the gardener at Prospect House. The garden extended from the rear of the house up Taymount Rise to the church (now flats).

At the age of 14, Ted was serving an apprenticeship with a local carpenter. By 21 was able to begin working on his own account so, in 1888, he moved into a small cottage, with a builder’s yard attached, at 55 Dartmouth Road. 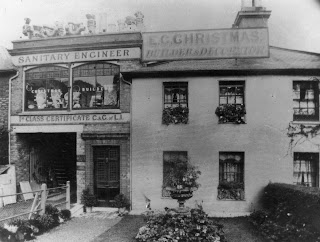 In the early years, Ted installed “sanitary plumbing”, electric-bells, burglar and fire alarms, lincrusta wallpaper and “Roman mosaic tiles”. However, as a trained carpenter, his speciality was “artistic joinery” and there were, apparently, many fine shop fronts installed by him. It is unlikely that any of this early work survives.

By the turn of the century, Ted was building on a large scale. He began developing “most of the shops" on the east side of Dartmouth Road. His initials (ECC) are above the first floor windows of 49 Dartmouth Road and the date “1901” on 53 Dartmouth Road. He redeveloped the group of cottages, including his own, between 55 and 57a Dartmouth Road. There is a foundation stone at the side of 55 Dartmouth Road (the entrance to his yard), laid by his wife in 1900.

Ted also built houses. His best-known early development is between Perry Vale and South Road, Forest Hill. In 1901, he completed 108-116 Perry Vale, five substantial detached houses called Linstead (conveniently bearing the date 1901), Ashdale, Ulverston, Rosaville and Aberleigh in honour of his wife, Laura. A couple of years later 131-153 Perry Vale were completed. Their names spell “TED CHRISTMAS”. Round the corner, 72-64 Sunderland Road spell “GRACE”, his daughter. He also built houses in Gaynesford Road and there are several other groups in this area. They are distinctive, and easily recognised.

Ted and his family were living at Arundale, 151 Perry Vale in 1911. Clearly, his business was successful for in 1913 he moved to Newfield Villa, Dartmouth Road, a large semi-detached Victorian house on the corner of Derby Hill, on the site of the present Kingswear House and opposite his business.

The other major development of Christmas houses began about 1930 on a field behind Holy Trinity School when 58-92 Thorpewood Avenue were built. This development also included houses in Round Hill and Radlet Avenue. The Radlet Avenue houses were the last to be built by E C Christmas and were still being completed at the outbreak of war.

Ted Christmas also converted Victorian villas into flats. Perhaps the best-known example is Courtside, off Round Hill, converted from two Victorian villas in 1922. This has the small leaded-light windows that are characteristic of much of his work. Other distinctive features include the elaborately carved bargeboards over many of the porches and the patterns often cut in the lead flashing beneath the windowsills. Such features make Christmas houses distinctive, and quite easy to recognise, although there is a marked difference in style between his Edwardian and 1930s work.

Many Christmas houses and flats were built to let. Letting, and then later selling the properties, led the firm inevitably towards estate agency, particularly when Ted’s son (also called Edward) took over the firm in the late 1930s.

In 1933 Ted Christmas moved from Newfield Villa to Bolney Court, 3 Lawrie Park Road, where he died in 1936. E C Christmas continued to operate as estate agents until the early 1970s. The shop at 55 Dartmouth Road retained its original front until replaced a couple of years ago. There are other “Christmas houses” and conversions scattered around the area. Because of their distinctive style, it is not too difficult to recognise them. For some homeowners in Forest Hill and Sydenham, the spirit of Christmas lasts all year round.

Hi - I grew up in Gaynesford Road until I was 21. Two years later my parents moved to Oxford and I bought the house back. On renovating it, we removed the old fire surround to remove decades of horrible paint and found a photograph, with an (unpaid) bill of some £9.8shillings. Both had fallen down the back. The photograph and addressee was Miss Vera Lance and the Bill was dated 1904. She was dressed in stagewear and standing by the curtains. I wonder if anyone can throw light on this lady? I believe the house was built in 1904, so she was the first inhabitant. Thanks

In case you are still interested, I think I may have found her. Vera Mary Lance, born 1891, living at 143 Sunderland Road in 1901. It says she is an adopted daughter. Head of the family is Frances Evelina Lance, who is living on Gaynesford Road in 1910. This is a little speculative. I have the number or Gaynesford Road but wasn't sure if you would want me to post it.
best wishes
Rachel

p.s it's not clear if Vera was adopted by Frances. In 1911 it implies that she is her niece. There are two other younger adopted children in the family at that point. Frances is not married.

Do you have any further information about Edward Christmas? He is a relative xx

One of the two younger adopted children mentioned by firthlet became my mother.

Happy to hear from anyone who has any further interest.

Get construction services from Local Builders in UK. You can contact with Vetted Trades Online, a leading repair company and has served many clients with best services.

Thank you for the post. If you are seeking the services from the best Local Builders in London, then you must visit Vetted Trades Online.

Thanks for sharing such information with us. I hope you will share more in the future like this. If you are looking for Local Builders in London, Contact Vetted Trades Online.

Thank you so much for sharing this useful information. Are you looking for local builders in London? If yes then visit Vetted Trades Online as they help their customers in finding the best worker at a reasonable price.

Are there any images of Newfield/Newfields/Newfield House in existence?
ie at the corner of Derby Hill and Dartmouth Rd where Kingswear House is now situated. Any help would be appreciated.

My grandfather Ken Pavey did a lot of interior decorating for Mr Christmas on the new builds and had an advert for many years across from Tooting train station with "Christmas and Pavey" on it. I never got to see that but I was told it was there for many years right up until 1980's. I still look for pictures of that. He lived in a Christmas house up until around 1939 when he went into the forces.

As a contributor from afar, I am so impressed with Ted Christmas both for his engaging personality and his influence on his community. I wonder if anybody has attempted a full scale biography of his life and work? While the Christmas Houses Conservation Area Study is a terrific source, I also wonder if there needs tp be a property-by-property catalogue of his whole work? Local government could commission such projects with a view to publication on an appropriate anniversary. Or a major project for a School of Architecture perhaps?