At the junction of Perry Vale and Hindsley's Place, on the opposite corner to the Foresters Arms, stood a two storey cream-painted building with a slate roof. At one time, this building played an important role in the social life of Sydenham and Forest Hill. 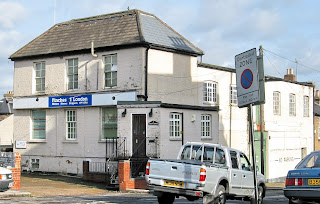 It is possible that between about 1847-1849 the Foresters Arms originated in this building before moving to the opposite corner of Hindsley's Place. However, a decade later the building was used for a rather unexpected, although better documented, purpose.

During the first half of the 19th century there were periodic panics over the intentions of the French, and fears that they were planning to invade England. As a result of such a scare in 1859 the Government encouraged the formation of local volunteer forces, prepared to defend the realm (or, some cynics of the time suggested, the property of the wealthy) in the event of a French invasion.

Sydenham and Forest Hill were not slow to respond to this patriotic call. A public meeting was held at the Dartmouth Arms on 29 June 1859. John Scott Russell (a naval architect of considerable note, who constructed the Great Eastern steamship) was in the chair. The proposal put to the meeting was: "That in the present state of Europe and with the view of maintaining an imposing neutrality it is essential that the defences of the Empire should be such as to defy attack. That with this view it is desirable that a volunteer force should be enrolled & that a rifle company be raised within this district to be called the Sydenham Rifle Company." There were just three dissenters who supported an amendment that it was not desirable to raise a Volunteer Rifle Corps.

A committee was formed, under the chairmanship of John Scott Russell, to carry through this proposal. Other wealthy and influential local people served on the committee, including Robert von Glehn of Peak Hill, Rev Taylor Jones of Sydenham College and Edwin Clark, an engineer who built canals in Russia, docks in India and Peru, and the time-ball on the Royal Observatory at Greenwich. Before a local force could be recognised, the Government insisted that a number of conditions be met. These included an adequate and safe firing-range and secure storage for the weapons. The committee met regularly over the following months (principally at John Scott Russell's house, Westwood Lodge, or the Forester Inn, Perry Vale) to try to resolve these and other issues.

By the end of July 1859 the committee had found suitable land for their firing range. Mr William Dacres Adams had offered a strip of land between Forest Hill and Sydenham stations, on the eastern side of the railway line. The firing range followed roughly the present line of Dacres Road, from near its junction with Perry Vale to just past the junction with Inglemere Road. However, within six months Mr Adams was expressing concern at the amount of disruption caused by building the butts (banks of earth at the Inglemere Road end of the range, intended to stop stray bullets). He was also worried about the safety of the range, but the committee managed to reassure him. When completed the range was some 325 yards long.

The committee appointed a drill sergeant (a professional soldier who would train the volunteers). He demanded accommodation. The committee still needed a secure place for their weapons. They also required headquarters for the volunteers and a meeting room for themselves. They found a building that could combine all these functions. Mrs Goding offered a house on the corner of Perry Rise and Hindsley's Place, built about 1845. It would be rent- free on condition that the committee undertook certain repairs and improvements. This they accepted. The building was renamed The Armoury and, in early 1860, became the headquarters of the Sydenham Rifle Corps. It consisted of an armoury, committee rooms and accommodation for the drill sergeant. Outside, there was a drill ground. This would have been at the back of the building, on the area now covered by a large extension.

The next task was to enlist sufficient volunteers. This proved difficult, which is hardly surprising as drill practice was held three times a week, at 7 a.m. on Tuesdays and Thursdays and at 7 p.m. on Saturdays. They eventually mustered a roll of 60 volunteers.

By the end of December 1860 the conditions required by the Government had been satisfied and the Sydenham Rifle Company became officially known as the 8th Kent Rifle Volunteer Corps. The committee felt a little aggrieved that they were only the 8th rifle corps in Kent. They were, in fact, the first to pass a resolution to form a volunteer corps but because of difficulties of recruitment, only 8th to gain government recognition.

John Scott Russell was appointed the first Captain-Commandant of the Corps in 1859, a post he held until 1861.

Life for the Rifle Volunteer was not all drill and target practice. Several members formed a dramatic club and in 1869 they gave a performance of three one-act plays (including "the laughable farce of “The Charming Pair"') at the Foresters Hall, Clyde Vale.Political circumstances changed, and interest in the volunteer corps waned. The 8th Kent Volunteer Rifle Corps was disbanded in 1871. The Armoury survived until a couple of years ago.