The World of Herbert Brush

In 1937 two men, a journalist and a film-maker, wrote to the New Statesman outlining their plans for a scientific survey of the everyday lives of ordinary people. They proposed that volunteers should keep diaries, recording their daily lives. The project, which became known as “Mass Observation”, was based at Grotes Building, Blackheath. By 1939 some 500 volunteers countrywide had agreed to keep diaries which were sent each month to Mass Observation. Although some wondered whether anybody was bothering to read them most continued writing their diaries throughout the war, and a few continued until the early 1960s.

The diaries offer a unique insight into the lives of ordinary people during this turbulent period. A few years ago a selection of post-war extracts from these diaries was published*. One of the diarists was “Herbert Brush” from Sydenham, a “retired electricity board inspector”. He began writing his diary in September 1940 and continued until March 1951.

“Herbert Brush” was a pseudonym, but the writer left sufficient clues in the diary to identify him. He was, in fact, Reginald Charles Harpur, aged 73 in 1945. He lived at 25 Kirkdale, on the junction with Thorpewood Avenue, from 1939 until his death in 1959. He shared the house with Winifred Gunton (“W” in the diaries and owner of the house), Dorothy Woods (“D”), and a cat. The relationship between the three members of the household is not clear. 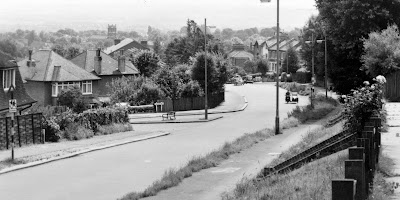 View down Kirkdale with Reginald's house just visible behind the long fence.
Reginald spent much time tending his allotment, round the corner in Baxter Field. He was not averse to experimenting: “I have planted out a row of ‘celeriac’ this afternoon. This is the first time I have attempted ‘celeriac’, and I don’t even know what it looks like”. He was disappointed with the results.

Reginald regularly entered a borough-wide competition for the best kept allotment. In 1946 he was dismayed that he was not even given a certificate. The following year he writes: “I have again put my name down as an entrant to the allotment competition though I nearly made up my mind to give it a miss this year, as I was not at all satisfied with the judging last year and suspect that the Labour Council… was responsible.” Reginald was, in his own words, “a Conservative Nationalist” and distrusted both the Labour council and government.

Gerald was regularly stopped by “Old Ing” on his way to the allotment. William Ing was a retired policeman who lived in Lynton Cottage, Mount Gardens. He liked to pass on gossip, which Gerald would record:
“…met Ing on the road... he always has the latest bit of news. Apparently the postman who delivered our letters and parcels has been caught pinching things and when the police visited his house they found about a ton of things which he had stolen…”
“According to Ing, the landlord of the Woodman went to the Derby… he telephoned and told his family to put their shirts on Airborne… which won. Ing was of the opinion that there was a wangle…”
Another person he chatted with in Kirkdale was Miss Hudson “the ninety-three-year-old nurse… with a voice like a foghorn” who, Ing claimed “can drink beer by the pint.”

Sometimes Reginald was inspired to write poetry:
“Is now too hot
To go to the plot
So I’ll sit indoors awhile
And drink barley water
As everyone ought’er
Who suffers a little from bile…”
And sometimes he would think about numbers: “I have been playing with no.37 today, a very remarkable number. A prime number, multiplied by 3 the product is 111, by 6 it is 222, by 9 it is 333 and so on by multiples of 3 up to 27”.

The diary records frequent visits with Winifred to the Capitol Cinema in London Road, or the State in Sydenham Road. In January 1948 he and Winifred went to the Capitol to see “Gone with the Wind”. Reginald writes that “…there was a queue about 100 yards long when we arrived, but we got in.”

During the summer Reginald creosoted the long fence that still surrounds the garden: “…it is rather a slow job, many people stop to talk about the weather and the iniquity of small boys who like to damage garden fences.”

Once, he records, a woman stopped him in Thorpewood Avenue: “… a large hedgehog was lying near the steps which led up to her house. She was afraid to touch it so I put it in her front garden, saying that it would be a useful pet… the animal had evidently tired itself out trying to escape from the pavement, but the only way was up the steps and I don’t think that hedgehogs can climb steps.”

In 1945 Churchill passed through Forest Hill “… so W, D and I went to London Road near Horniman’s Museum to see him go by. We got there about 6pm but it was 7:10pm before he went past in an open car… making his usual V sign and I only caught a glimpse of him…”

Going to his allotment one evening he saw the postman emptying the pillar box in Kirkdale (it is still there) when a man in a car drove up and tried to hand a large envelope to the postman: “the postman would not touch it and said that the man must put it through the slot... the man had to get out of his car and walk round to reach the slot and then had some difficulty getting it through… the postman then picked the letter out of the pillar box and put it in his bag. The man began to curse him and gave him a few unpleasant names. I looked round several times as I walked down the road with my bucket and hoe, and they were still at it when I turned into Charlecote Grove.”

Reginald experienced two exciting examples of modern technology. Someone lent him a Biro pen: “I am trying it out, just to find whether it would do for my diary writing”. He was impressed, saying that “the ‘Biro’ pen runs so easily it is a pleasure to write with it”.

Reginald was not so easily impressed with television. In 1948 Reginald and Winifred “went into the Sparks, next door [Seymour Lodge, on the site of Hassocks Close], to wish them a Happy New Year and to look at their television picture of the Cinderella pantomime. My eyes are not good enough to see such a small picture well”.
Reginald also gives his views on the younger generation (for him, those born after 1914): “My own opinion is that they are very much worse in every way. Judging by the ones I come across they have no manners at all… London children are absolutely crafty little liars and clever thieves…”

Gerald finds shrapnel on his allotment, sees people sifting through rubble in the grounds of Sydenham School and long queues to buy a loaf of bread. These glimpses of life in Sydenham in the immediate post-war years give a fascinating insight into the issues of the time and especially the mundane preoccupations of ordinary people.

The theft of the Irish Crown Jewels

The story begins with a report in The Times of 8 July 1907 that the “Crown Jewels and other Insignia of the Order of St Patrick”, popularly known as The Irish Crown Jewels, had disappeared from a safe in Dublin Castle, Ireland. This regalia had been created in 1830 from diamonds and rubies once belonging to Queen Charlotte and was used on State visits to Ireland. Queen Victoria used the regalia on four occasions and Edward VII once, in 1903.

On 6 July 1907, during the preparations for Edward VII's next visit to Ireland, it was discovered that the regalia had disappeared. It was clear that this was an inside job as there was no evidence of a break-in, and both the strong room and safe had been opened with keys. The safe was in the office of Sir Arthur Vicars, Ulster King of Arms and guardian of the Crown Jewels.

In the official report of the theft, Vicars was found negligent and forced to resign. One "grave charge" against him was that he “associated with a man of undesirable character” and “introduced this man into his office”. In defence, this man was said to be a friend of influential peers and “came from a well-known and highly respected family”. He is not officially named.

Vicars vigorously protested his innocence. His three assistants resigned. One of these, with the job title “Dublin Herald”, was a young man of “charismatic personality” called Frank Shackleton. Frank was, and still is, widely regarded as the most likely suspect. He was probably the “man of undesirable character”. He “lived by his wits and his charm, ingratiating himself into the highest social circles”. He was also homosexual. I suspect that is what “undesirable character” means.

Frank was never charged with the theft. However some six years later he was found guilty of “fraudulent conversion” when he and another cheated a woman out of nearly £6,000. He was sentenced to 15 months hard labour. On his release he changed his name to "Frank Mellor", and under that name he lived in Cator Road in 1919-1920. He then lived for a time in Penge. In about 1934 Frank Mellor moved to Chichester where he ran an antiques shop. He died there in 1941.

Several questions remain. Why would Edward VII want to protect Frank Shackleton? In early 1907 Ernest Shackleton was making arrangements to lead his first expedition to the Antarctic, an expedition being followed closely by Edward VII and Queen Alexandra. They visited Ernest when his ship was at Cowes on 4 August 1907. In September 1907, shortly before leaving for the Antarctic, Shackleton gave a lecture to the King and Queen at Balmoral where he said the King was “very jolly” and “enjoys a joke very much”. Was the unfortunate Vicars sacrificed to save the family name of a national hero?

Another reason for Edward VII's close interest in the case has been suggested. The Marquis of Lorne, who was married to the king's sister, Princess Louise, is known to have been homosexual. He was also a close friend of Frank Shackleton. At this time homosexuality was still an imprisonable offence. If it became widely known that the King's brother-in-law had a relationship with the man, even then, widely suspected of having stolen the Irish Crown Jewels the scandal would have shaken the Monarchy to its roots.

For many, that is the reason why so many vital documents were destroyed, why Shackleton was shielded and why the inocent and naive Vicars took the blame.

And what of the Irish Crown Jewels? There are various theories including that they were sold to a Dutch pawnbroker, or to private collectors, or buried outside Dublin. They were even, according to an official document, offered for sale to the Irish Free State in 1927. Whatever became of them, to this day their whereabouts has remained unknown.