The Origins of Mayow Park 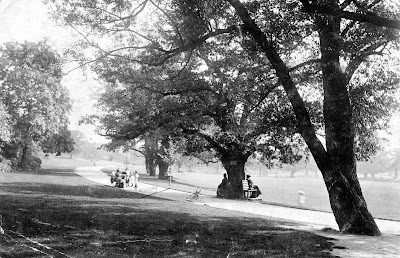 On 29th May 1875, a "Plea for a People's Recreation Ground" appeared in the Sydenham, Forest Hill & Penge Gazette. It regretted that "all available land in our neighbourhood is being taken for building purposes" and young people "meet and loiter about the roads, congregate at every street corner, becoming a moral pest and a nuisance". Furthermore, the poor had nothing but "the streets, the music hall, the penny gaff or the public house for their evening's resort".
This letter, written by Rev William Taylor Jones, headmaster of Sydenham College, led to the creation of Sydenham Public Recreation Ground (later renamed Mayow Park), the first public open space in the south of Lewisham. The following week, the Hon and Rev Augustus Legge, vicar of St Bartholomew's, wrote endorsing Taylor Jones' proposal. He also offered twenty guineas towards the cost.

Six months later, stung by an editorial in the Gazette that asked why so little progress had been made, Taylor Jones replied that he had hoped that "a more energetic person" would have taken up the reins. He then discussed the two major issues - how was money to be raised, and where was the ground be located?

Raising money was straightforward. The Metropolitan Board of Works (the London-wide local authority of the time) might make a significant contribution, and the rest would come from donations. The Lewisham District Board of Works (forerunner of Lewisham Council) could lay out and maintain the ground.

Finding a suitable site was more difficult. Several were discussed. One, "an excellent site", was not then available, but it would later become Wells Park. Another suggestion was glebe land (called Vicar's Field) in Dartmouth Road, where the Library, swimming pools, Thorpewood Avenue and Derby Crescent were later built. This was the preferred site. However, objectors suggested that as it was let as allotments to the poor, at a very low rent, it would be unjust to deprive them of this benefit.

By November 1875 Taylor Jones had formed a committee of two dozen of the more wealthy and influential residents, including Mayow Wynell Adams, F J Horniman, A G Hennell (architect of Forest Hill library), Rev Augustus Legge and T W Williams (embezzler, drug-taker, suicide, local politician and Lewisham's first mayor). Taylor Jones also published a list of those willing to give money, of whom F J Horniman (with £100) was the most generous.

By December 1875 the Lewisham District Board of Works had agreed that it would accept and "enclose, plant, and preserve [a suitable site] as an open space forever". Taylor Jones said, "The ground should be used for recreation, and not a mere ornamental or pleasure ground". By "recreation", he meant sports (football, cricket etc.). This comment makes clear the distinction between a "park", which was primarily ornamental, and a "recreation ground", which was primarily for sports.

A public meeting at the Foresters' Hall, Clyde Vale (the building survives) on 24th February 1876 was a turning point. It was attended by "many well known ladies and gentlemen". The Earl of Dartmouth was in the chair. Sharing the platform with him was his younger brother, the Hon and Rev Augustus Legge. Their father, as Lewisham's major landowner, was a principal proponent and major beneficiary of the enclosure of Sydenham Common in 1819.

At this meeting, Taylor Jones announced that Mayow Wynell Adams had offered 17½ acres of land for £8,500 (about half its market value). The meeting unanimously accepted the site offered by Mayow Adams and accepted a motion, proposed by George Grove, to open a subscription list of those willing to donate.

In a book published in 1878, Mayow Wynell Adams wrote, "It had often occurred to me how pleasant a thing it would be if I could devote a portion of land for the amusement and recreation of the public, but … it was not in my power to give it." In 1874, Mayow Wynell Adams inherited the Old House, on the site of the present Earlsthorpe Road. After a legal dispute with his trustees, he was able to offer the site of the present park.

A deputation, led by William Taylor Jones, approached the MBW to apply for a grant. After much discussion (and an Act of Parliament, which was needed to allow the MWB to use ratepayers money to buy land, and to bind the Lewisham District Board of Works and its successors to care for the ground in perpetuity) the MBW agreed to contribute half the cost of the site. The trustees of the Lewisham Parochial Charities (of whom Taylor Jones was chairman) agreed to donate £1000. That left £3250 for local people to raise.

The Sydenham, Forest Hill & Penge Gazette was vociferous in its support for the campaign. It pointed out that there was an obligation on the part of those who had benefited from the enclosure of Sydenham Common to give something back. "From those who received so much, something substantial is expected in return, and the public eye … will not fail to watch closely their response to the appeal for funds," the Gazette said, threateningly. Then there were those who lived near the proposed park, for their houses "will be considerably enhanced" by it. In fact, it concluded, everyone will benefit and therefore all should contribute.

By early May 1876, the treasurers held only £700 of the £3250 that local people needed to raise. William Taylor Jones wrote again to the paper, reminding people of their duty. Thomas Coleman Dibdin, a landscape painter well known in his own day, and local resident, donated "six delightful sketches" of the site of the park, for sale at £5 each, to raise money.

Eventually contracts were exchanged and the Lewisham Board of Works began the task of preparing the ground. The site consisted of four fields, and while the hedges were cleared, the ancient hedgerow oaks were kept. The site had to be levelled and drainage installed, particularly in the central area, which was to be used for cricket. The surviving bank around this area was for spectators. The original layout did not include the main entrance from Silverdale (that had to wait until the road itself was developed) but otherwise the design of the park has changed little, the bowling green and tennis courts being the main additions, and the lodge (part of the original design) the main loss.

On 1st June 1878 the Sydenham and Forest Hill Public Recreation Ground was formally opened. A procession left what is now Dalmain Primary School in Brockley Rise at 3 pm. It made its way along Dartmouth Road, down Kirkdale, Sydenham Road and Mayow Road to the park. Children from schools along the route joined it, as did many shopkeepers, who had closed their shops for the occasion. Buildings were decorated with flags and bunting hung across the roads. Members of local organisations marched (Kent Artillery Volunteers, West Kent Fire Brigade, Ancient Order of Foresters and others). There were also the carriages of those too important to walk. The "oldest inhabitant" said he could not remember an occasion to equal it. By four o'clock, the procession entered the recreation ground.

There were some 11,000 people in the park. The chairman of the Lewisham District Board of Works declared the park open "for ever", and added "those two words … signified that it was to be kept open and in good order for ever … in the same beautiful order to which it was now seen … never worse, but probably better". Another speaker showed a model of a drinking fountain to be erected in honour of the Rev William Taylor Jones. He also presented Taylor Jones with a silver inkstand.

Since the opening of Mayow Park, some ten open spaces have been created in the area. The significance of Mayow Park, however, is that it was the first. William Taylor Jones created something that few had done before. It was a typically Victorian venture, led and largely funded by the wealthy and influential, undoubtedly from the best of motives, for the benefit and improvement of those less fortunate.

Have just visited the park for the first time and was greatly impressed by the beautiful oaks and other trees in a rolling vista of green.
A bit of a treaure.
Congratulations Sydenham from Tower Hamlets!

I grew up in nearby Queenswood Road in the 1950s.I remember the large vistorian houses overlooking the park on Dacres Road.( These were unbelievably demolished by Lewisham Council and each replaced by an 11 storey tower block - skyscapers in the 60's ) But my father told me the houses - many of which belonged to embassies - helped fund the park and had their own private entrances from their gardens. Because of this even in thoe days ,the park was obliged to close at dusk and that is why there were large iron gates and railings enclosing the park.
As an aside I rmember the cricket pavillion overlooking the flat area of grass - long since demolished . Even in the 1950s it was a time of change

I lived in Earlsthorpe Road, 1965 to 1972 and used to walk past Mayow Park everyday to school at Dacres Road.

I remember one event I think it was about 1969 or 1970, late August or early September, it rained and rained and rained, and Mayow Park filled up with water. You'll notice the the dip in the center of the park corresponds to Adamsrill Road, 'rill' being a small stream. So there obviously used to be a small stream, named Adamsrill, running through what is now Mayow Park down Adamsrill Road. I'll guess that was why they had to drain the ground for the cricket pitch.

Then when it rained so much, Adamsrill tried to start flowing again. But the route down to Adamsrill road was blocked by Mayow Road, so Mayow Park filled up with water. After than they laid pipes in the ground to improve the drainage so it won't happen again.

if you are looking for best Loft Conversion Specialist then contact at Vetted Trades Online. We are offering best quality repair work.

I lived in Recreation Rd so spent a large amount of my recreational life in Mayow park. My fondest memories are playing cricket for the school (Adamsrill ) in the centre and in particular using the cricket nets late into the summer evenings. The bowling green was always well used and we used to sit on the wall overlooking it marvelling at the skill of the bowlers. The gardens and lawns leading down the the cafe were so impressive ( I now appreciate them more as an adult and gardener ) and the clay tennis courts were well used and amazingly well kept. I remember the conker trees by the tennis courts and being chased by Parky as we thew sticks up to get the conkers!! I walked through the park every day to get to Adamsrill. The "tower blocks" did indeed seem like skyscrapers at the time and we spent a lot of evenings messing about in the cricket pavillion. It is a brilliant place and even though I now live in Devon, when I come up to London to see relatives, I always go through Mayow park... and go to see the dinosaurs in Chrystal Palace park!!Long may they survive..