As it now seems probable that the main part of the Kirkdale Learning Centre was built to the designs of Sir Joseph Paxton, I thought it might be worth tracing the history of the building, and its contribution to the community. 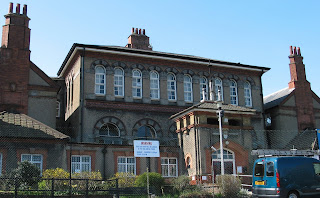 Nothing further is recorded until in 1858 a meeting was held where it was agreed to build a lecture hall in Sydenham along the lines of the Mechanics' Institutes. These institutes were intended as "self-improving working men's adult education colleges", often funded by wealthy local people and offering free lectures on arts, science and technical subjects. They might include a library and newspaper reading room, and sometimes also a school.

A suitable site was bought with the help of a loan from Robert Harrild, of Round Hill. Sir Joseph Paxton was asked to produce designs for the building, which he did. Unfortunately funds were not sufficient to follow his designs fully, and they were modified by Henry Dawson. The foundation stone was laid on 12 October 1859 by Alderman David Wire, Lord Mayor of London, who lived at Stone House, Lewisham Way.

The building was officially opened by Sir Joseph on 15th January 1861. From the beginning he had been closely involved with the institute and was described as its "originator". He was appointed its first president and a trustee. Other trustees included Scott Russell and Sir George Grove.

The building included provision for a school on the ground floor. The British School, which had been founded near the Golden Lion in 1851, moved into the new building in January 1861. A girls' school opened a couple of months later, apparently on the first floor. British Schools were non-denominational, set up as an alternative to the National Schools, such as St Bart's, which were strongly Anglican.

In 1876 the School Board for London became responsible for the British School, and it was renamed Sydenham Central School for Boys. Then, in 1905, the LCC took over responsibility. They renamed it Sydenham County Secondary School (and, for a while, Shackleton Girls School). In 1917 the school moved into new premises in Dartmouth Road to become today's Sydenham School. 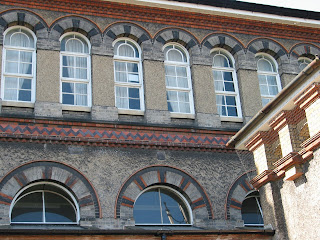 The building was enlarged in 1904 with wings and large chimneys at each side, and a single storey extension across the front. Above the entrance are the words "Sydenham Central School". Behind these extensions the original building rises, in a style described as "Italian Renaissance". The detail and colour of the brickwork are worth a close look. 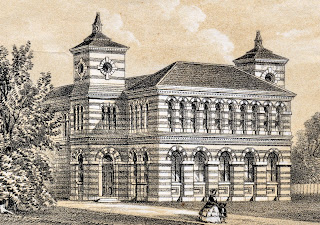 The contemporary drawing above, which has recently come to light, shows the building as it was intended, with two towers that were never built, and extending further back, but the main block appears very much as it survives today. Although much of the building is now pebble-dashed, I suspect this was applied when the Edwardian extensions were built. The outline of the five tall ground-floor windows can still be seen within the modern extension. All this suggests, therefore, that the present building is nothing less than the central block of Sir Joseph Paxton's original design.

I thoroughly enjoyed reading some of the topics covered in your blog. Especially Herbert Brush's diaries.

Can I just highlight a few duplicates in the Kirkdale Learning Centre entry? There seems be some repetition of certain paragraphs.

Other than that, thank you for a most enjoyable read.

Thanks Gregory. I've removed a couple of paragraphs; I hope it reads better now.

Brilliant, thank you for that, lovely to go past it and think of a bit of history looking out at us!