A Brief History of Lawrie Park 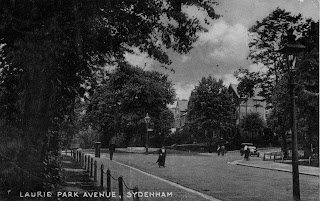 e Park takes its name from the Lawrie family, several generations of whom owned extensive land and several large houses in Sydenham. In 1806, Andrew Lawrie bought the newly rebuilt Sydenham Hall (to which Hall Drive once led). He was a major under Wellington, died at Burgos in 1812 and has a memorial in St Bartholomew’s church. The family also owned Westwood House, which was on the site of the Shenewood estate.
When the Great Exhibition of 1851 closed, the Crystal Palace Company was formed to re-erect an enlarged building within a grand park. To this end they bought nearly 400 acres of land on the slopes of Sydenham Hill. An 1852 map of their property shows that the estate included not only the present Crystal Palace Park but also (with a few exceptions) the present Lawrie Park estate. The original site acquired by the Company extended from Crystal Palace Parade in the west to the railway line between Sydenham and Anerley in the east. The southern boundary was Anerley Hill, and in the north, Westwood Hill formed the boundary. It is clear from the map that as early as 1852 the Company intended to raise funds by building along Crystal Palace Park Road and Sydenham and Lawrie Park Avenues.
Lawrie Park was one of five local estates built during the early 1850s and in 1858 a writer commented that Sydenham had many parks “consisting not of open spaces, but of good roads and detached or semi-detached villas”. Lawrie Park, being so close to the Palace and under the direct influence of the Crystal Palace Company, was probably the most prestigious. 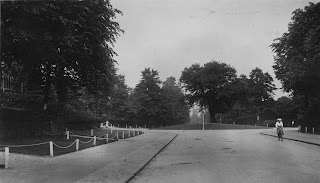 George Wythes of Bickley Hall bought the site enclosed by Crystal Palace Park Road, Lawrie Park Road and Westwood Hill. Wythes made his fortune building railways, so developing housing was a new venture. On the strength of his success at Lawrie Park, he went on to develop Bickley Park. It was surely no coincidence that Wythes was a good friend of Sir Joseph Paxton.

Wythes employed William Goodwin as his builder. The Goodwin family had built houses in London Road and the Jews Walk conservation area. They now turned their attention to Lawrie Park. By 1858 there was “a large manufacture of bricks on the upper part of the land”. Charleville Circus, the final development, was built over the brickworks in the mid-1880s.

William Goodwin built Cecil House, 191 Lawrie Park Gardens, for himself in 1860, and lived there until 1862. Interestingly, Luis Zorilla, an exiled Spanish anarchist and friend of both Camille Pissarro (who painted the best known image of Lawrie Park in 1871) and Paul Gauguin, was living here in 1885. According to Gauguin’s biographer, he travelled from France “to Cecil House in Lawrie Park where Ruiz Zorilla was now living”. So both Pissarro, in 1871, and Gauguin, in 1885, visited Lawrie Park. 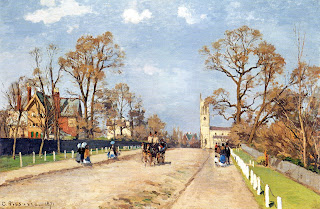 Several distinguished architects have been associated with the estate. Charles Barry, the architect of Dulwich College, designed several buildings including, possibly, Holmbury Dene, 2 Lawrie Park Road. It is possible that Watson Fothergill designed Burnage Court, Lawrie Park Avenue, in 1888. Joseph Fogerty, who lived at Ashbourne, Lawrie Park Gardens, did some work for what is now Sydenham High School, including the extraordinary stable and coach-house. His daughter, Elsie, went on to found the Central School of Speech and Drama.

Other architects who lived on the Lawrie Park estate, and may have designed some of its buildings, included Henry Currey (St Bart’s lychgate and St Thomas’ Hospital, Westminster Bridge Road), Edwin Nash (interior of St Bart’s and St Michaels School, Lower Sydenham), John Norton (houses in Crystal Palace Park Road and Tyntesfield, Somerset) and James Tolley (ACTS Credit Union building in Kirkdale). Even Forest Hill’s best known builder, Ted Christmas, had an influence. He converted Bolney Court, 3 Lawrie Park Road, to flats where he spent the last few years of his life, dying there in 1935.

Although so few of the original buildings survive, the wide roads, grass verges, mature trees and views have helped Lawrie Park retain much of the quality and character envisaged by its creators and captured so vividly by Camille Pissarro.

Dear Sir or madam The first picture on this site shows a Car which I beleive to be a 1914 Silver Ghost Owned by the Parsons family and driven by my Grand father who was killed in the 1st war. This car is now in America . I am intrest in the picture to identify the car and to try and find the registration number. It is quite amazing to find such a picture Can you please help Regards Charles Baseley born in Sydenham in 1952

I lived at Ashbourne House, 10 Lawrie Park Gardens in early 1980s. It was divided into four flats then. The flat on the ground floor on the left hand side if you looked at the house was a grand ballroom. It was unoccupied all the time I was there but previous occupants of our flat (upper stairs right hand side) used to access this flat via a set of steps in the garden which led to a cellar. About halfway back there was a set of stairs which led into this part of the building. I presumed it was stairs used by the original occupants’ servants for them to collect coal and wine. We had many parties ourselves in that house, very happy times.
If anyone lived there or lives there now, I would love to hear from you.
Lyn283@hotmail.com

Whoops put the wrong email address, it should be
Lyn284@hotmail.com